A Familiar Face Stumbles In From The Wasteland


Whelp, I've been away from this thing for over 5 years!   I haven't done much in the way of creating terrain or converting minis during that time.  However, a few months ago I did actually get off my butt and create something, so I finally figured I should post it here.   I originally talked about this at the website Post Apoc Wargames


So basically I built a water truck that travels the wasteland selling, well...water.

I took a 1/43 scale oil(?) truck, and I had a bin full of car/armor bits from Ramshackle. I have to say that I'm a little disappointed in the Ramshackle pieces - the batch I got is made of VERY brittle resin, and I've snapped a few pieces in two. But then again in a post-apoc world things are supposed to look broken, so I guess that's okay. 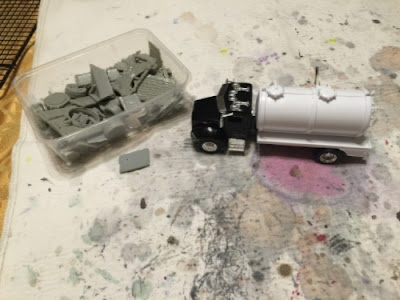 I decided to change out the thin squidly little front tires with the bulkier Ramshackle ones.  I'm not worried about the back tires - I'm going to have them partially covered with armor. 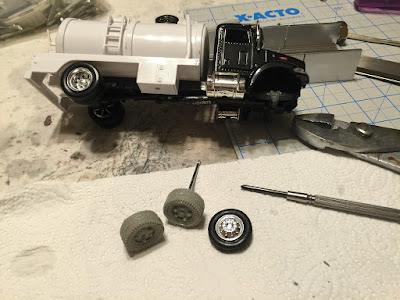 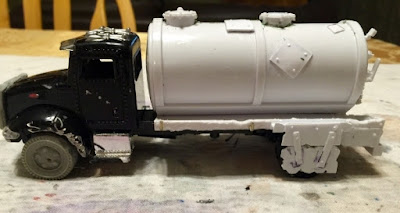 All my Post-Apoc stuff gets hit with a textured spray paint.  It helps to heighten the rusty effect. 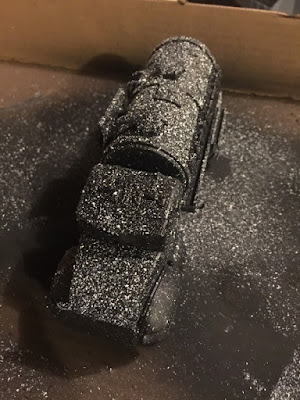 Some basic painting and shading: 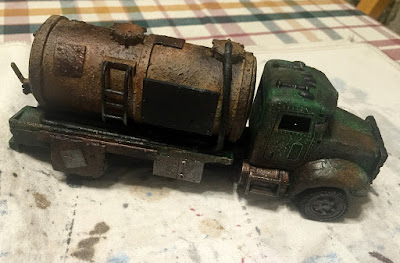 And now for the big reveal...it's a Starbucks coffee truck, not a water truck!  People will do without many things in the dystopian future, but coffee isn't one of them. 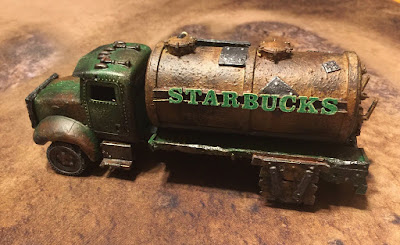 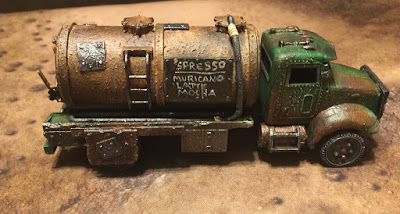 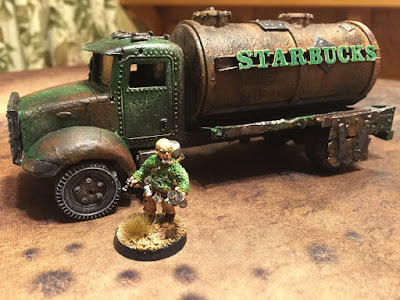 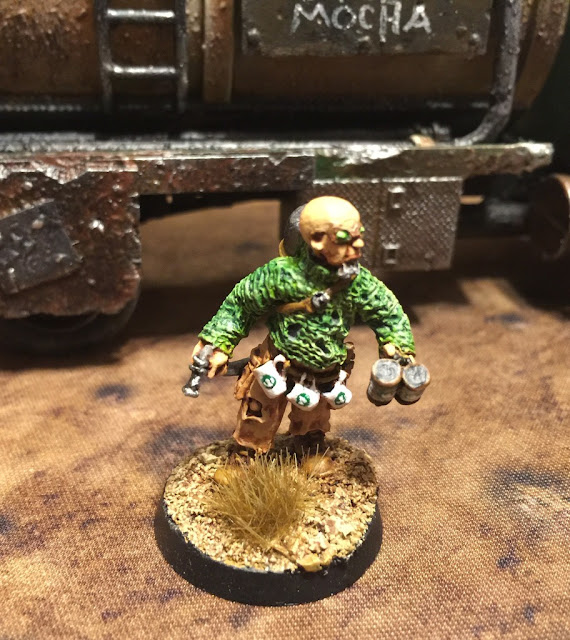 Hope you enjoy.  It was actually nice to be creating again!

One of the people I play games with is a Traffic Engineer with Clark County, WA.  He  received a letter of complaint about a traffic signal from a local citizen.  In the letter he was called "a Neanderthal Traffic Engineer".  So I created the following figure and gave it to him last night. 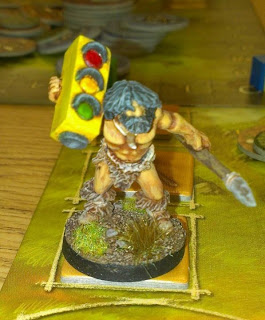 And yes, I know that the figure is a Cro-Magnon and not a Neanderthal, but it's close enough.
Posted by ConfusedDad at 9:19 AM 21 comments:

I ACTUALLY COMPLETED SOMETHING!

I finally got around to finishing a new post-apocalyptic building.  Dice Age Games is the only game store in Vancouver, WA (where I live) so I knew I'd be modelling it sooner or later.

Yes, it does have a big tower-like thing sticking up out back.  The game store is located in a building that used to be part of a water-park, and the tower enclosed the stairs that led to a big water slide.

I'm hoping to get another building or two built this month.

Of course I have to leave with a pic of our hapless survivors being swarmed by my zombies outside the store.  That's it for now.

I told you that this was a sporadically-updated quasi-blog...

Arg!...I finally got a little free time to do a quick post here.  The Real World (work, kids, dogs, etc) has been keeping me busy for awhile. I've restarted organizing my stuff again, and thought I'd post something I used in my Vampire Counts army when I played Warhammer. 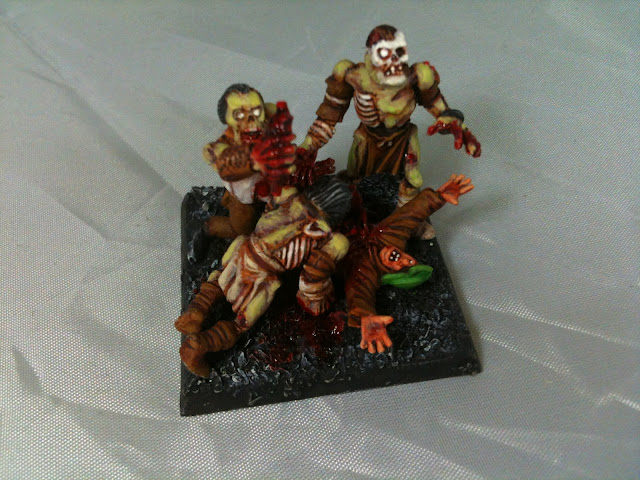 I used this little tableau to represent 4 zombies in my rank and file zombie horde. 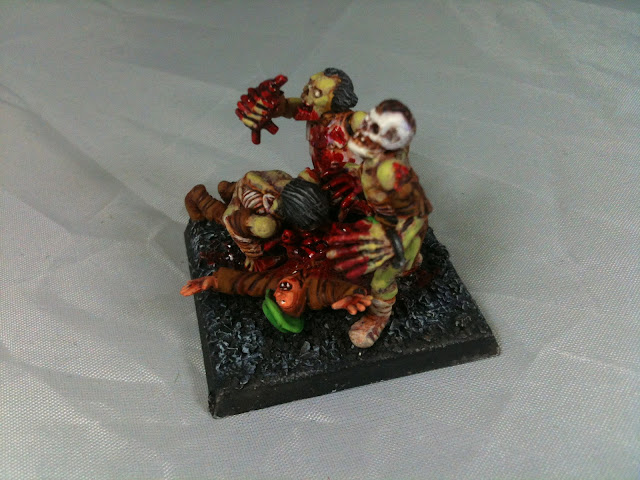 The zombies are the regular goofy-looking Warhammer zombies.  The unfortunate victim came from the Warhammer Giant box.  I really like the way the victim came out, but felt a little sorry I did that to him.
Posted by ConfusedDad at 11:37 PM 9 comments:

The Gang That Couldn't Shoot Straight 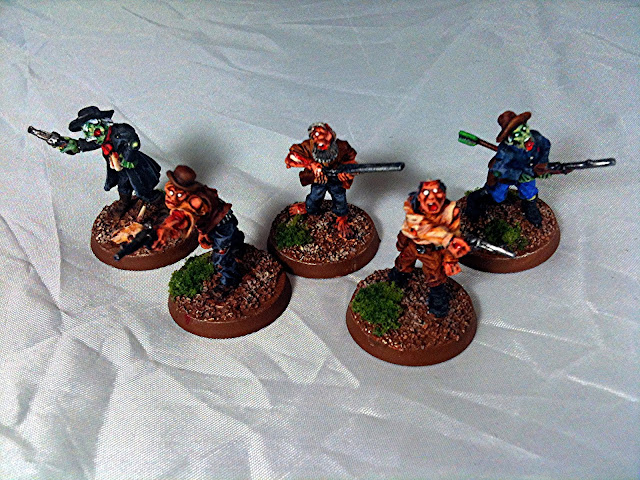 Foundry makes (or made) a set of Old West Zombies.  There are seven figures in the set. (Five of them pictured above). 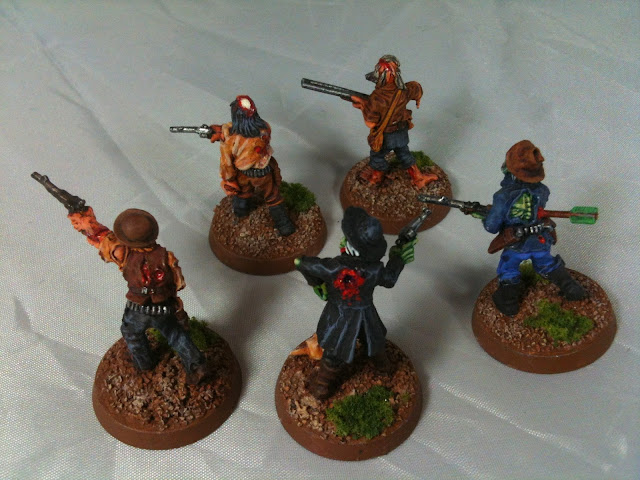 These guys are some of the best zombie figures I've ever bought.  There's lot's of detail on the sculpts, and they look animated, like they're slowly shambling. 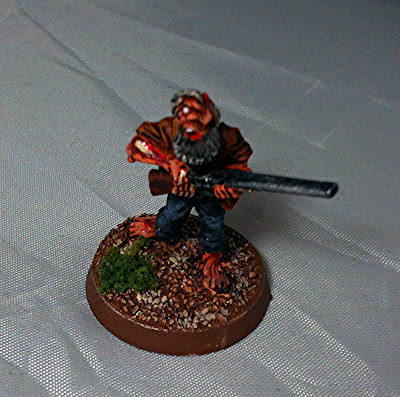 Sorry for the fuzzy pictures, I was having an off day! 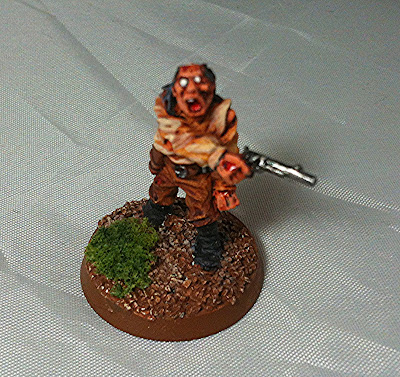 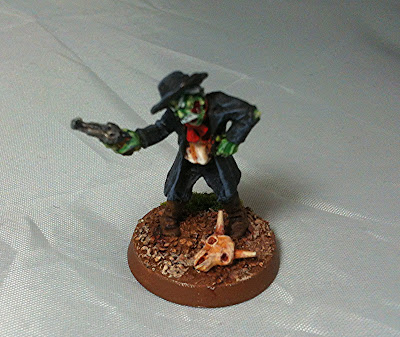 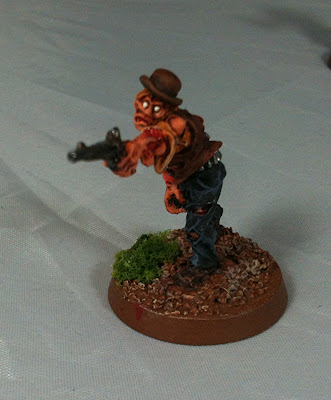 This is my favorite.  I mean look, he's AIMING the gun!!! 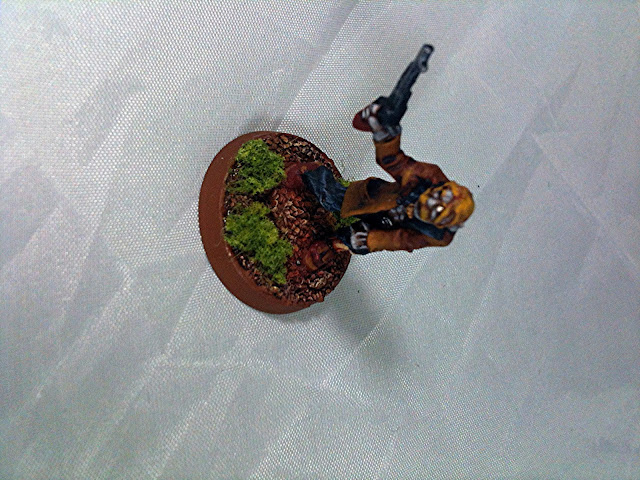 This Dude missed the group picture.
There's one other figure, a one-armed zombie cowboy, but I haven't even primed him yet.  Anyway, these guys make up part of an gang I use when we play an Old West game, along with a mad professor-type in a steam-powered wheelchair, a trio of albino gunslingers, and a damaged gunslinger robot (from West World).  Sometime I'll post the whole gang, but for now, enjoy these guys, and buy them if you can!
Posted by ConfusedDad at 8:04 PM 8 comments: 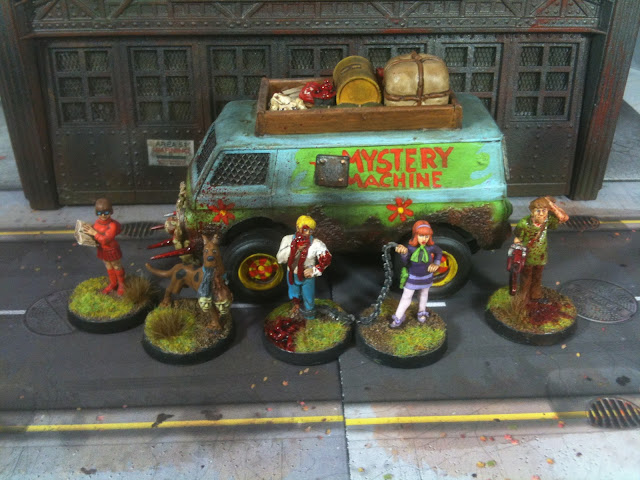 I finally got around to adding the various bits of gear to the top of the van, and attached the impaled zombie to the front.  One thing I realized as I started taking pictures is that I forgot to add the license plate to the back to cover the hole there.  But for now I'm making an Executive Decision and officially calling this one DONE! 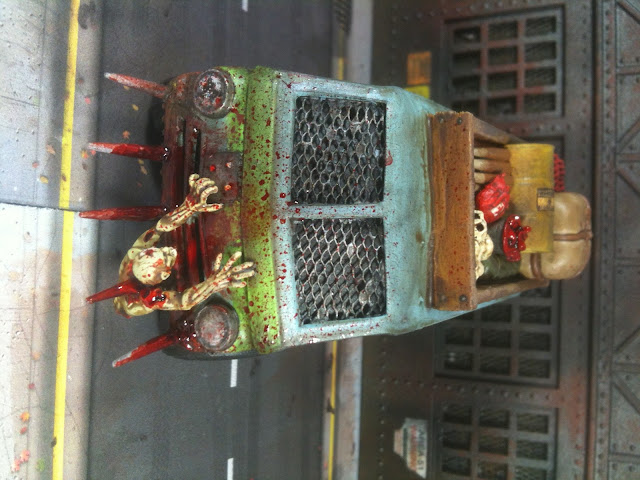 Here we have the impaled zombie (well, half a zombie) still clawing the front of the van. 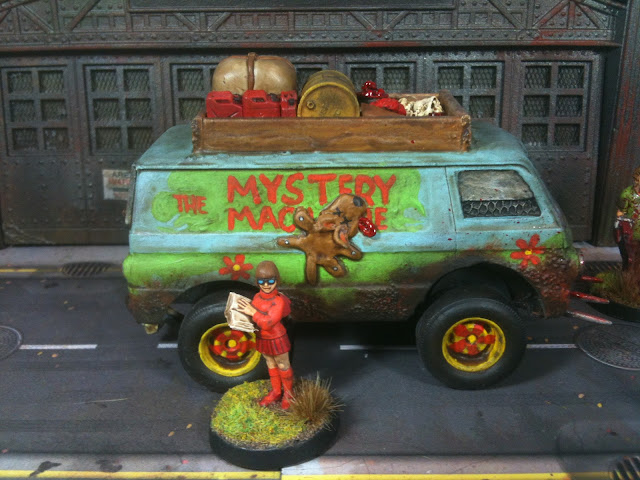 Velma shows off the the right side with the pinned-on Scrappy-Doo pelt, which thanks to a suggestion from Brummie now includes the "Urk! I'm dead!"-tongue hanging out.  Thanks Brummie! 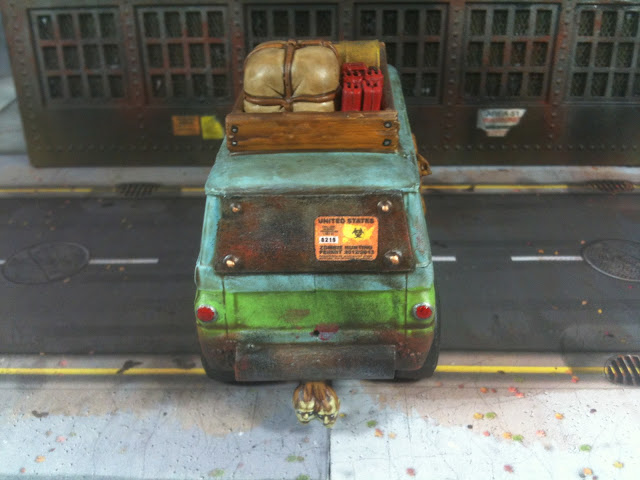 Although it's hard to read in this photo,  the back of the van has an Official Zombie Hunting Permit displayed.  Even in the Post-Apocalyptic world the Scooby-Gang follows the rules.  (Except that they're driving around without a license plate!  Urrrghh!  I will fix that sometime soon and cover that hole!) 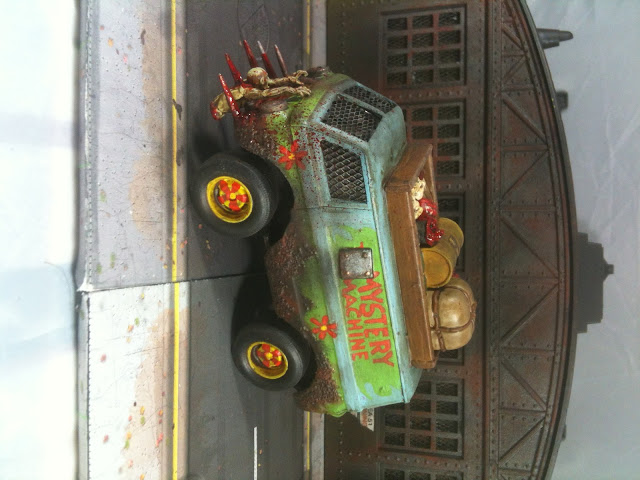 Nothing too exciting here on the left side. 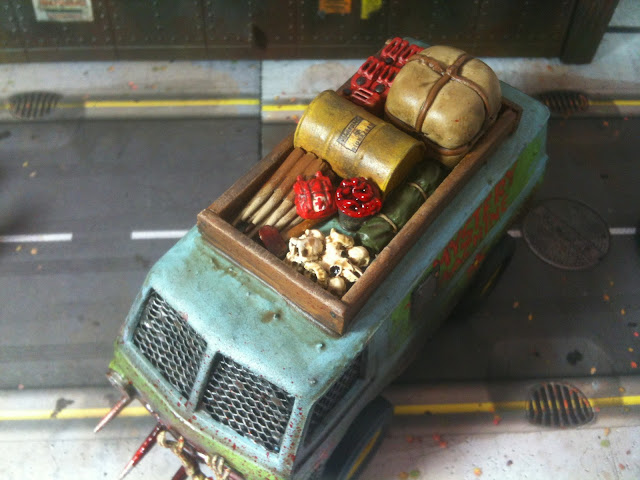 Let's look at some of the stuff the gang carries around.  There's a bunch of stakes up front, because the gang will be operating in a post-apocalptic world that will have all sorts of nasties, including vampires or vampire-like creatures.  There's a stack of skulls (nice trophies) of significant past victories.  A bloody sledge hammer, good for bashing zombie heads.  A Left-4-Dead health pack.  A bucket of guts to help keep Freddy in line. A basic rolled-up tarp or tent.  A barrel of radioactive toxic goo...I have no idea why.   Several gas cans.  And a burlap-wrapped bale of Shaggy Snacks.  (The Scooby Snacks are kept in the van). 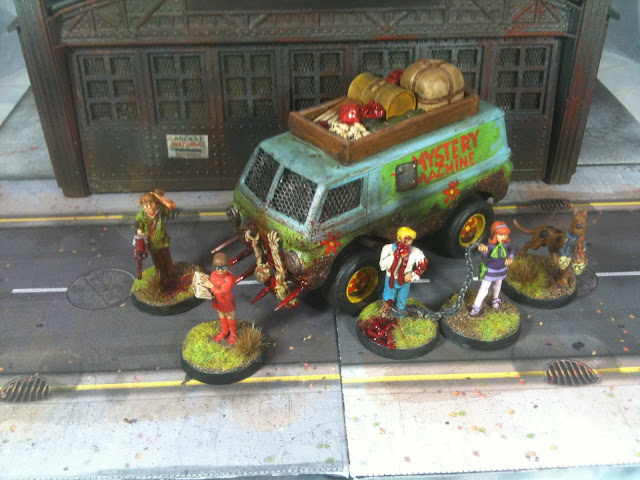 As you can see the van scales pretty good with the figures.  Looks like the Scooby-Gang is ready to start solving post-apocalyptic mysteries, or whatever it is they do in a World Gone Mad...and they'll need all the help they can get as you can see below:


SCOOBY-DOO and the MYSTERY of the HIDEOUS HIVE CAT! 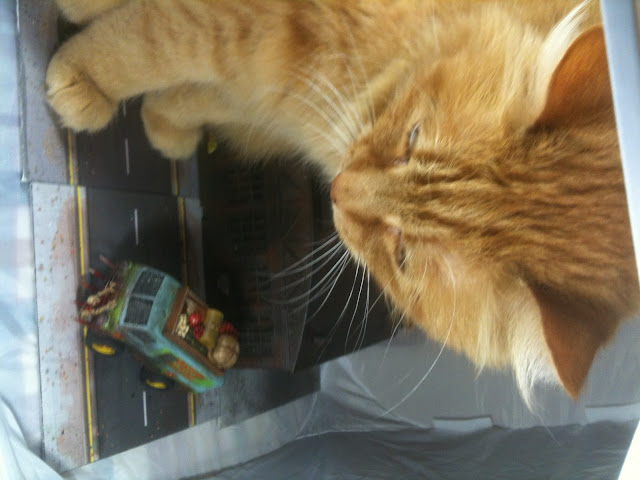 Sam (aka: The Hideous Hive Cat!) made an unexpected appearance a couple of years ago during a game of Necromunda and became the deadliest creature in the Hive.  He's been laying low for long time, but he became very curious as to what I was doing while taking these pictures, so it looks like he might be jumping genres and entering the Post-Apocalyptic Scooby-Doo world...

Be careful Scooby Gang!  If you thought BA Worms were bad, wait till you meet the Hideous Hive Cat!

EDIT!
﻿I added the license plate!  If you don't get the reference then surf on over to the Two Hour Wargames Blog. 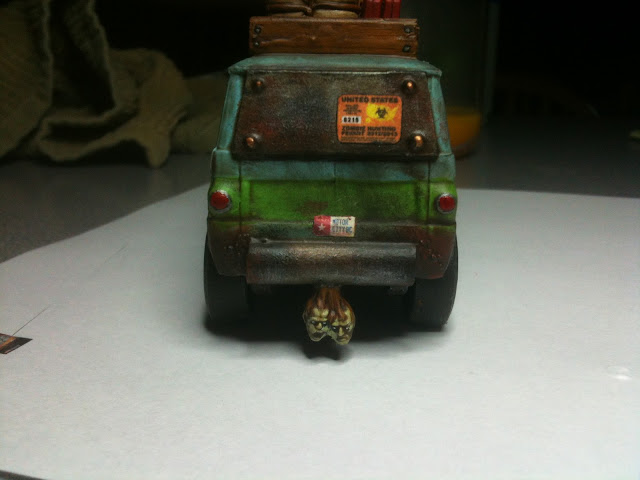 The model has dried enough for me to hit it with some matte spray and tone down the glossiness.  I went and touched-up/highlighted, primarlily the letters and flowers.  I added the finishing details to Scrappy, highlighted the Truck Nutz, did some additional minor cleanup.  It looks dirty but that's the look I want, a Post-Apocalyptic-falling-apart piece of machinery.  One of the last things I'll do is add an overall dusting with powdered chalks.

I've started painting the front zombie and the stuff that goes on top separately.    I've documented pretty much all the major steps I do when making something like this, so next posting will be when the whole thing's done.

Here's it is in its current state:

Oh yeah, I've got some detailling planned for the back.  Yes, that hole will be covered!

The front will look a lot more interesting once I add the blood splatters and the impaled zombie.
EDIT:
Brummie, you are a mad genius...

Number of Times Bored Surfers Have Stumbled Onto This Site...